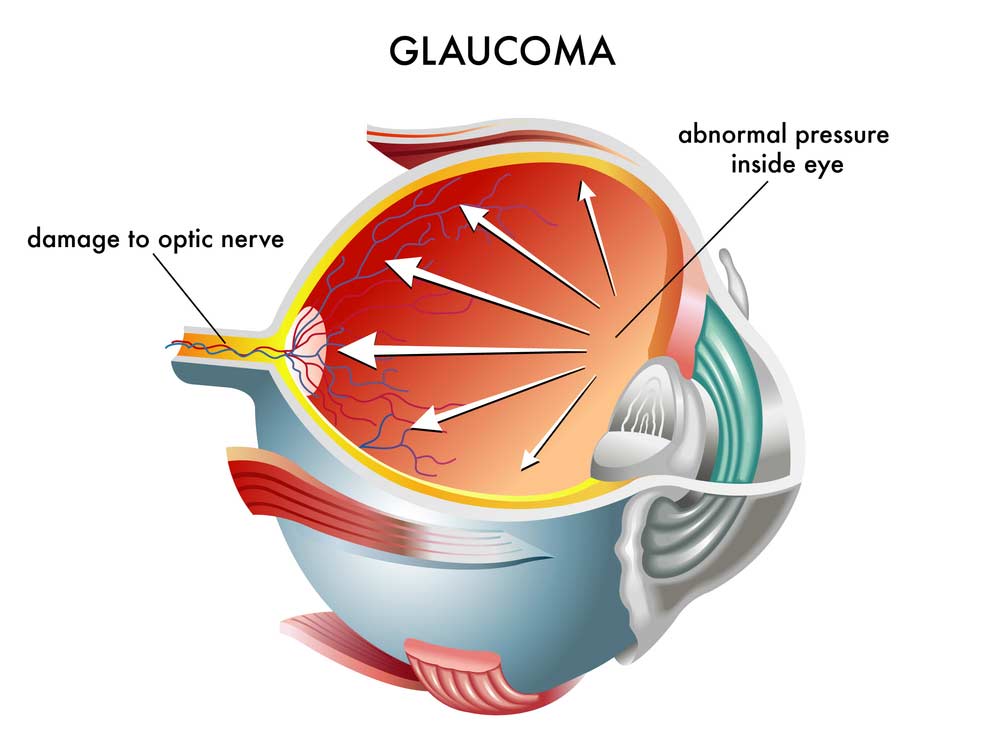 The term “glaucoma” identifies an ocular neurodegenerative disease that gradually leads to loss of vision due to irreversible damage to the optic nerve, i.e. the nerve that transmits images to the brain. Chronic glaucoma often affects both eyes and is not accompanied by symptoms. Therefore, if not diagnosed and treated in time, it leads to a silent loss of sight, without the affected person noticing it. This is why glaucoma is often called “the silent thief of sight”.
Glaucoma is often (but not always) accompanied by an increase in the intraocular pressure (IOP), which is the main cause of damage to the optic nerve. The IOP is used to give texture and shape to the eye and normally ranges from 8 to 21 mmHg (millimetres of mercury). If the pressure becomes too high, it damages the very delicate fibres of the optic nerve. Glaucoma is called “the silent thief of sight” because even when the eye pressure rises and destroys the optic nerve there are no symptoms and the patient continues to see well. Early diagnosis of glaucoma is extremely important as this disease can be treated more successfully when diagnosed early. Therefore, it is very important to know the risk factors in relation to glaucoma and periodically undergo an ophthalmological check-up.

The main risk factors are:

The term glaucoma denotes various eye diseases: acute and chronic forms, open-angle and angle-closure, primary and secondary. The differential diagnosis by a specialist is essential for the correct management of the disease.

The most frequent form of glaucoma, the primary open-angle glaucoma, is not associated with evident symptoms until its advanced stages, when the optic nerve shows serious and irreversible damage. Screening examinations are therefore essential to allow for early diagnosis and preserve vision. The diagnosis of glaucoma is a complex procedure, which can only be made by an ophthalmologist and requires numerous investigations. The main tests for the diagnosis of glaucoma are:

There are also more sophisticated investigations—HRT and OCT—which are used to analyse the nerve fibres of the retina and the optic nerve and which can be performed according to the judgment of the ophthalmologist. They are useful for reaching an early diagnosis of the disease and monitoring the state of the optic disc and retinal nerve fibres with high accuracy during the follow-up. Once diagnosed with glaucoma, it is essential for the patient to undergo regular checks carried out by an ophthalmologist (at least twice a year) as well as undergo diagnostic tests suitable to verify the progress of the pathology and the effectiveness of the prescribed therapy.

The treatment of glaucoma is essentially based on the reduction of the intraocular pressure until obtaining the so-called target pressure, to be identified according to the individual patient (there is no single target pressure). No certainly valid treatment has so far been identified to prevent the progression of damage to the optic nerve, even with perfect ocular pressure it is possible to witness the evolution of the disease.
The reduction of the intraocular pressure can be achieved with drugs, para-surgical treatments (lasers) or surgery.
DRUGS. There are now several categories of drugs that alone or in combination with each other are able to effectively control ocular pressure. Antiglaucoma therapy (hypotonic eye drops) is a chronic therapy that must be instilled every day at the exact times recommended by the ophthalmologist.
Even if they are eye drops, as with all drug therapies there are side effects, both at the eye level and at the systemic level. The main categories of drugs to lower intraocular pressure are:

There are supportive therapies without effects on IOP that, although not yet validated by adequate controlled clinical studies, have shown an experimentally proven pharmacological activity. This type of therapies could be useful in directly protecting nerve cells that are lost in the course of glaucoma disease. They are generally oral therapies with molecules that have experimentally demonstrated a neuroprotection activity on retinal ganglion cells.
In association with eye drops therapy for lowering intraocular pressure, these neuroprotection therapies aim to slow down the progression of glaucoma pathology (e.g. Citicoline, Homotaurine, Coenzyme Q10, Ginkgo Biloba etc.). Generally, they are molecules that cannot be taken through diet.

The most used lasers in glaucoma are three:

Glaucoma surgery is still used today when drug therapy or laser treatment is no longer able to guarantee optimal eye pressure. The main reason why surgery is not considered as first therapeutic approach is that at least 75% of people with glaucoma will never need surgery and that, after five years, it loses its effectiveness in about 40% of cases on average. The goal of glaucoma surgery is to create a route for the aqueous humour which is alternative to the natural one. This result can be achieved with both fistulising and non-fistulising operations. There are many surgical techniques with multiple variations that can be used based on the surgeon’s experience. All surgical techniques had to be confronted primarily with the duration of their efficacy over time; to improve this aspect, substances that slow down the healing processes, called antimetabolites, are now used both during the surgery and over the following months. For the most severe forms of glaucoma that do not benefits from other therapies, so-called drainage implants can be used, i.e. implants designed to release the aqueous humour from inside the eye.